We are about to leave Hong Kong on December 5th (Happy birthday, Mara!), where we have spent 3 months. We've started the Argonne anti-jet lag diet http://www.netlib.org/misc/jet-lag-diet and are enjoying the feast days!

Here is a picture of one feast at La Marmite, a great little French restaurant in Soho. Actually, these are just our appetizers!


I had my last class and a group photo. I'm in the back, center left. 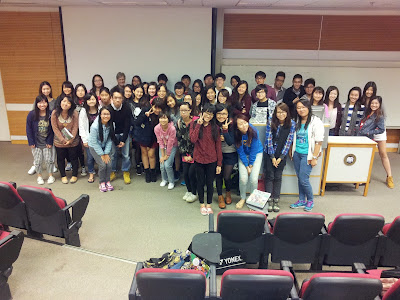 We have had momentous days these last weeks. I gave a paper at the International Association of Language and Intercultural Communication conference comparing disagreements in student conversations in the US and Hong Kong, and had lots of great conversations with people from around the world including a nun from Kenya and a Chinese woman who had grown up in France but now lives in Norway. This was the culmination of my research fellowship. We got to see a lion dance for the opening ceremony: 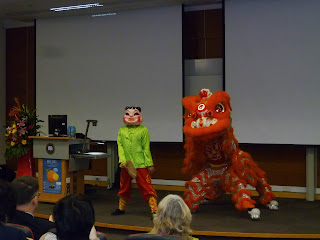 After the conference yesterday we had a nice walk with graduate students in media and our Australian friend, John, as we explored part of Tsim Sha Tsui and finished with Indian food. He invited a colleague in linguistics who had also presented at the conference and his wife, both from Israel. We enjoy these serendipitous moments.


Last weekend I was invited to a wedding because I am apparently still part of a work group at the General Education office where I was two years ago. Such a nice feeling. The only problem is that Allen is not a part of the group, so only I was invited!

I learned that the day of the wedding, the groom goes to the bride's home and does silly things to win her heart. She and he then have a tea ceremony with her parents in ceremonial dress and she receives gold bracelets. Then they go to his home and the same thing happens. All of this was videotaped and shown at the wedding after their ceremony. The wedding was held in a fancy hotel. When we arrived, we told them our names and gave money! It is traditional to help pay for the banquet, and also give a little more. The banquet cost was $130 US!

We looked at their huge books of engagement pictures, taken in Taiwan, drank some wine, and waited a couple of hours while the happy couple took lots of pictures with friends and family, including our table, Mei's work group. Then we witnessed a Western style wedding, white dress, veil, etc. The couple read their vows and then two lawyers came and formally ratified their marriage. The happy couple is busy all night getting photos made of groups of family and friends each time the bride changes her dress, and going around to each table to have a toast (with tea so they do not fall over). The bride changed her clothes 4 times. this is with the red dress for luck and she is covered in lots of gold. Reza, her boss, and I were the only Westerners.


We arrived at 7 and left at 11. As we were about to leave, I glimpsed a neighboring table. Tho hotel is connected to a big mall which we walked through to arrive. Did they shop before or during the wedding? Hong Kongers are shoppers!

We went to Sunny Wang's terrific gallery opening--all beautiful glass. She is a prof at HKBU and a friend. We are now proud owners of one of her pieces. 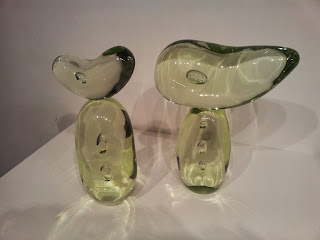 Allen traveled to the Philippines to visit a friend after the typhoon. He had to cancel his flight to Cebu, but he went to Manila and then Baguio City in the north of Luzon, which was not affected much. 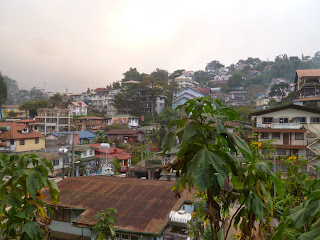 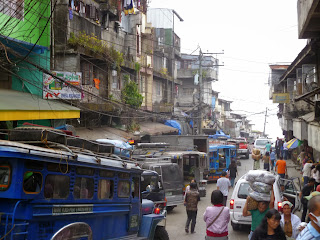 Before leaving Hong Kong, I had to see another neighborhood--Sham Shui Po--which is stocked with computer parts, among other things. Allen knows the area well. 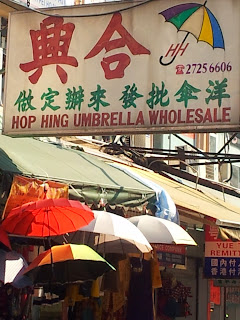 I've made a short list of things I will not miss: 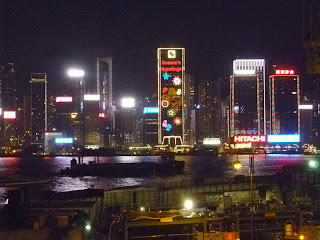 Posted by Susan Fiksdal at 5:31 PM No comments:

Last week we visited Taiwan for 6 days, squeezed between my teaching days. We flew to Taipei, the capital, and after checking into our hotel, we headed immediately to the National Palace Museum. When Chiang Kai Shek fled mainland China, in 1948, he made certain that national treasures from 6 museums were shipped to Taiwan. Many of these had been in crates because he had ordered them moved multiple times in the 1930s when the Japanese invaded China. Not all the crates made it to Taiwan, but we were amazed by the collection. We had visited the Beijing Museum and I had seen the Shanghai one, but this is a much larger collection. There were tons of mainland Chinese tourists there, but we managed to see the whole collection.

Unfortunately, we could not take pictures, but Gallery 304, Uncanny Ingenuity and Celestial Feats was a favorite. We saw some exhibits through the lens of a magnifying glass, and the detail in miniature was truly incredible. We did not miss the Jadeite cabbage from the Qing Dynasty, and that was a good thing. It is the same size as a real cabbage.

Later, in the gift shop, we saw multiple iterations of the cabbage--earrings with necklaces to match, large scale replicas as well as small, stationary, rubber place mats, etc. It was clearly the most popular item of the museum! The picture above is from the Internet. Apparently, it will be displayed in Tokyo soon, the first time it has been shown abroad.

The next day we visited the Chiang Kai Shek memorial. It is enormous, with a huge statue of Chiang guarded by soldiers.

The changing of the guard was very elaborate and must have taken about 10 minutes.

Another popular tourist sight in Taipei is the Longshan Temple. This was the only temple we visited because we had seen so many recently in Burma! 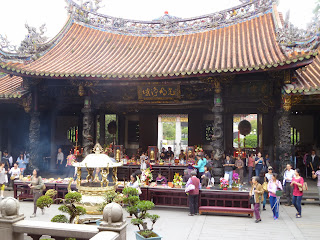 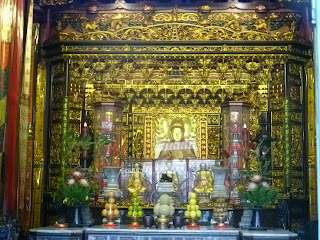 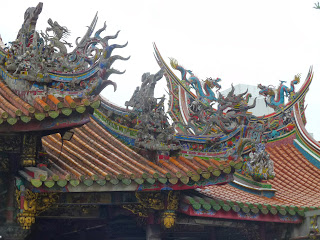 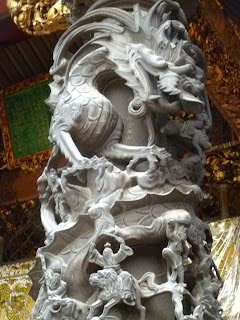 At the Dihua market we saw well preserved historical architecture and, of course food: 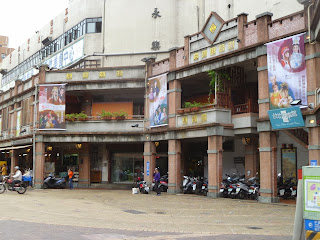 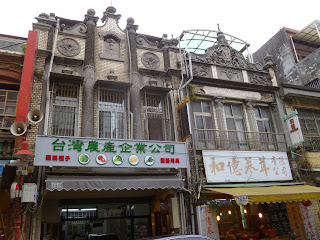 After a full day in Taipei, we went to Yangmingshan National Park, reachable via the subway. You just take a bus that has a circular route around the part, and get off anywhere. Because we can't read or understand Mandarin, we got on a bus that not everyone wanted, and ended up on an express trip half way around the park. We didn't really mind. We took a trail that was the first one built to be accessible to wheelchairs, and ended up in this beautiful valley: 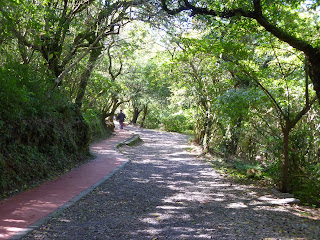 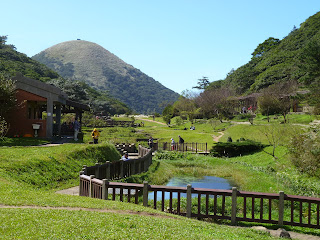 But we went to the park to hike, so we climbed a mountain! You can see it in the background in the picture above.

Don't let  that .6 km fool you. It was practically straight up! 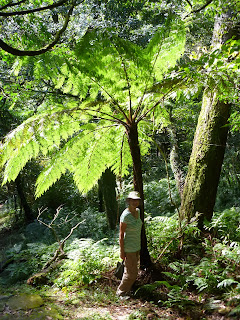 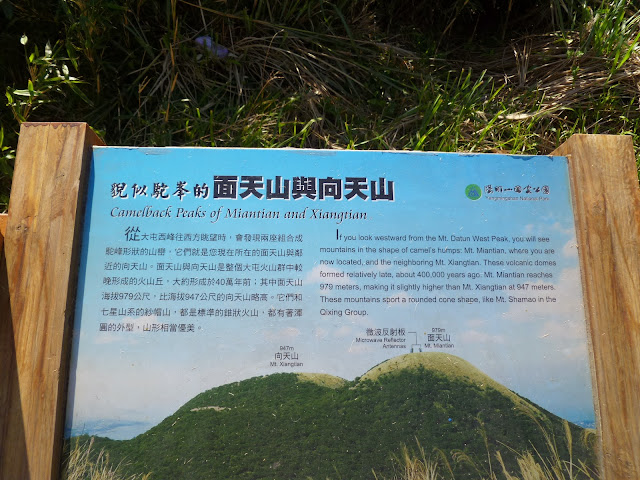 After three days in and around Taipei, we took a train to Hualien on the beautiful east coast so we could see the Taroko Gorge. Our first day we had time for a bike ride in the park that follows the coast. Just as we reached the whale watching point, it began to rain.


We spent a day at the Taroko Gorge, listed as the number one attraction in our guide book. Its walls are marble, formed 5 million years ago. Allen was trained as a geologist, so we didn't need a guide. The first trail was very easy, so we thought that because visitors have been coming here since the 1930s, all the trails might be quite accessible. 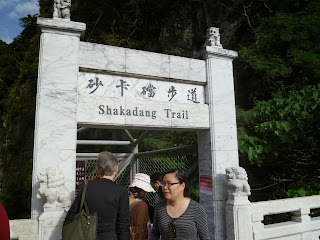 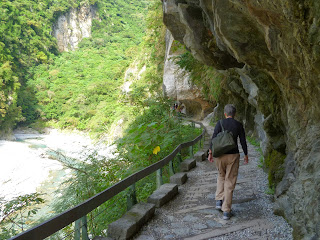 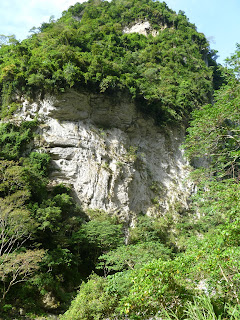 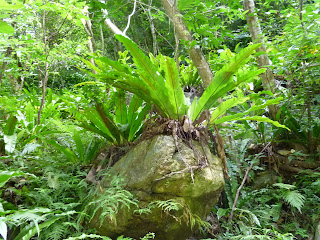 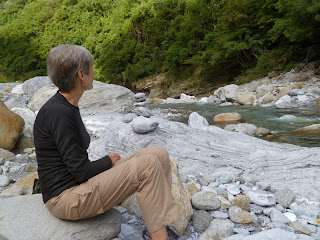 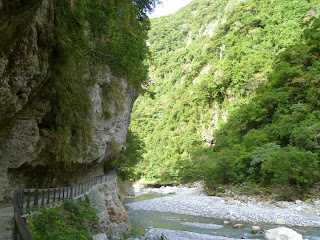 We visited Swallow Grotto, so called because of the holes in the rock: 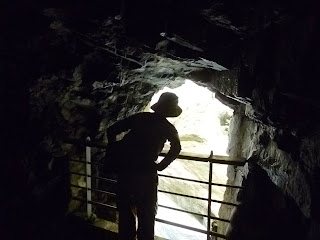 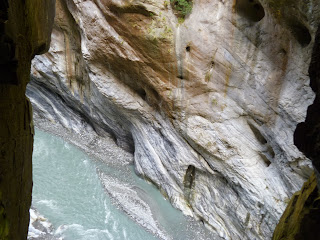 The final spot I will show is very picturesque, and also where we had our most challenging hike: Eternal Spring Shrine. 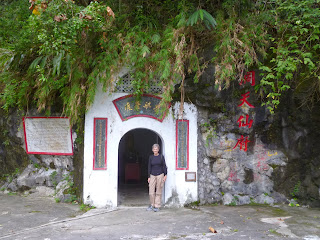 We were surprised by Taipei. On our walk from our hotel to the subway, we passed 5 coffee shops, Italian, Japanese, Chinese, and American (you know the one). It seemed a lot like Hong Kong with a cosmopolitan feel, big shopping malls (which we avoided), electric taxis, a subway system just like Hong Kong's, and distinctive neighborhoods. There is even the world's second tallest building there.

We were pleasantly surprised by how quickly people walked (here everyone walks in slow motion), how friendly people were, and how considerate they were on the subway. In the subway there were lines painted in the waiting area and people actually stood in them and waited to board. Once in the cars, there were priority seats that were empty if there were no disabled or pregnant women around. I can't count the times people offered us their seats. We have priority seats here in HK, but they're always full. Very few people offer seats to anyone, and racing into the car to get a seat seems to require standing right in front of the doors so that those exiting have to have a strategy.

When I returned to Hong Kong, I told some Chinese friends about the Taipei subway and the considerate behavior of the Taiwanese and one of them said, "ah, but they're not really Chinese!"

Some of them may very well be American. We met two Americans of Taiwanese descent who introduced themselves because they heard our accents.

I told my students that the subway announcements indicated respect to the diverse Taiwanese culture. Every announcement was repeated four times in Mandarin, Taiwanese (Hokkien, a language 75% of the people speak), Hakka (probably about 10% speak it), and English. There are many indigenous peoples in Taiwan also, and we noticed tour buses went to many sites to watch dances and buy woven goods.

The announcements in the subway were similar to HK, but I had to laugh when they said no eating, drinking, chewing gum or betel nut! In Burma, lots of people chew betel nut so their teeth are reddish. Betel nut is a mild stimulant similar to caffeine. Even with this reference to rural culture, in the places we visited, Taiwan seemed very different from the mainland. 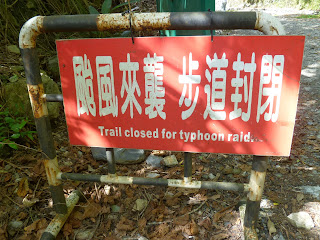 Posted by Susan Fiksdal at 5:12 PM No comments: